While a lot of football around the country is still on hold, the Ebbsfleet over 50’s football team have returned to training in Gravesend. Players meet up at  Woodlands Park, Dashwood Road, on Thursday nights between 6.30pm and 7.30pm for a socially distanced keep fit session. Chris Judge said “Our usual venue at Goals Dartford is still not open, so we decided to start doing some basic training sessions as we not only miss attending the Kuflink Stadium but also kicking a ball.”

Chris added “The over 50’s Kent League has now been cancelled for 2020, so we assume we will be playing friendly games much later in the year when easing of the Covid crisis continues.” For further information please contact: Chris Judge 07765 663 258 Email: judgece66@aol.com 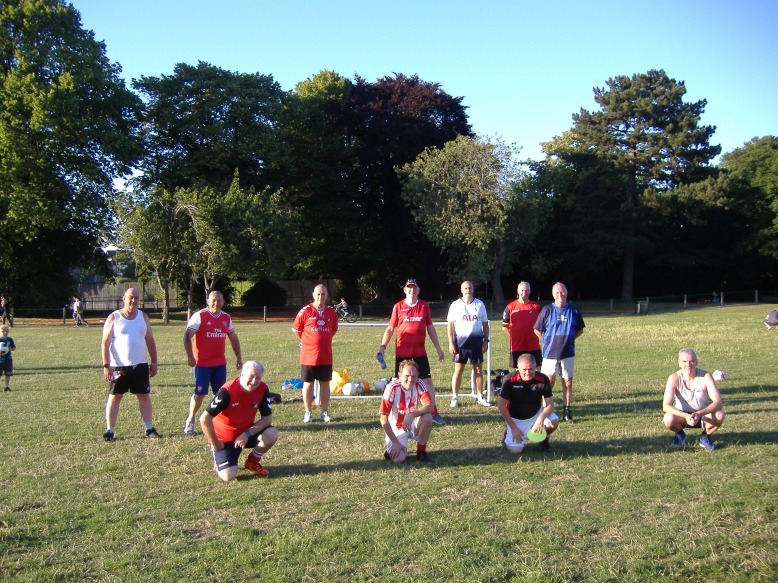 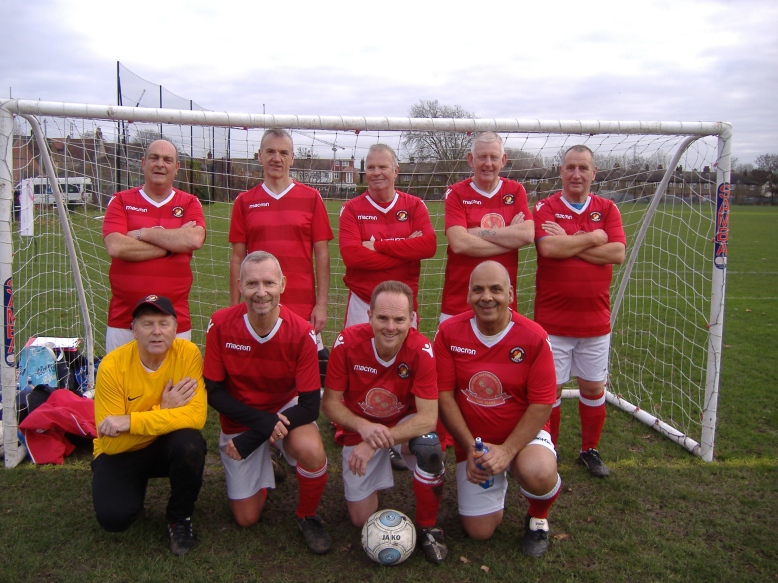 In 2016, trials were held to see if a Walking Football Team could be created. Various matches were played which suggested there was support for this new venture. For the 2017/2018 football season, Ebbsfleet United have now entered a team in the Kent Walking Football League.

The Ebbsfleet Team is administered and run by the Fleet Supporters’ trust in conjunction with the Ebbsfleet  Football Club Management.

Who can play? Anyone over the age of 50 and we now have 14 signed up players.

How are the games played? Very similar to 5 a side football, except you are not allowed to ‘Run’. Games are 20/25 minutes each way and have 6 players with an additional 4 subs who you can put on and off as many times as you like. Sometimes the games are played with 7 players.

What is this money for?  So far the team has used the money to pay for training balls, training shirts and training cones.

Football Kit?  Each player is supplied with a full (Home) kit of shirt, socks and shorts. Individuals have to supply their own boots and shin pads. An away kit (hopefully sponsored) is currently being investigated.

Training. The team has begun regular training sessions to pull everything together and improve fitness. This is held at ‘Goals’ Green Street Green Road, Dartford, next to the Leigh Academy from 7.00 to 8.00pm. The cost is £7.30p per player per night.

What’s happened up to now?  We lost our first three matches, drew in a friendly and won the last game! We are a new team, but going in the right direction.

Who do I contact and where can I get more information? Print off and complete the form below, or contact Chris Judge, the Co-ordinator email: judgece66@aol.com Tel: 07765 663 258 or details from Steve Boem at the Fleet Supporters’ Trust Hut or in the Kuflink Stadium shop.

The Ebbsfleet over 50’s walking football team triumphed to score an 8 nil victory over West Ham on Saturday 7th December. Played on a grass pitch, the venue was the Flanders Playing Fields in East Ham, which is now a community football ground and the same place that legend Bobby Moore was first scouted as a youngster many years previous. The Ebbsfleet team consisted of Mark Stapley, Dave Munn, Kevin Baker, Dave Powell, Paul Lancaster, Gurch Gill, Paul Hook, Chris Judge and Paul Cox. The one hour match was split into four 15 minute sessions, changing ends after each session with subs able to change at any time. The Manager for the Fleet was Dave Munn and he worked out the strategy and positioning. Chris Judge said, “We let each player be a Manager throughout the year and then we can sack whoever we like at the end of the season!….”  Munn proved spot on with his player choice and positioning against an experienced West Ham side that has beaten the Fleet in the past. Chris Judge added, “We train every Thursday at Goals Dartford and we have been practising one-touch passing and heavy marking of the opposition.” This paid off with an early goal from the Fleet’s Paul Hook after only 8 minutes. Four minutes later, defender Mark Stapley drove a powerful strike from long distance to see the Fleet two-nil up. West Ham were a little unbalanced by us scoring so early on, but this resulted in the Fleet team keeping their shape and stopping their forward play. Gurch Gill was the next to score, followed by Paul Hook and then Paul Cox. Hook then went on to score another two in the last quarter of the game to win the man of the match award taking four goals. Chris Judge had to go in goal as regular goalie Dave Bobby was unavailable. He saved a number of shots and then saved the only penalty of the game. He said, “The last time I dived like that was when the chocolate biscuits fell off the sofa and I had to make a miraculous recovery.”  West Ham were good hosts and the game was played in good spirit despite the competitive nature. The over 50’s play every Thursday at Goals Dartford from 7.00pm till 8.00pm. Anyone can come along.